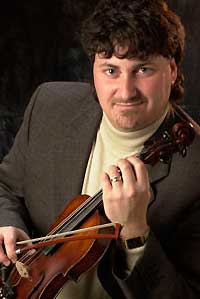 Ray Legere is the 2003 ECMA (East Coast Music Award) Winner for Bluegrass Artist Of The Year which he also won in 1996. The Amherst, Nova Scotia native is becoming known as one of Canada's premiere fiddle/mandolin players. Ray is a five-time winner of the Eastern Division Bluegrass Awards in the categories of Mandolin and Fiddle " Player of the Year", honors which have distinguished him with a "Masters Award" for each. The first year of the awards he captured a total of three, including guitar and was recently awarded the Masters for "Best Fiddle Player" in the Central Canadian Bluegrass Awards. Ray, although not wanting to be a contest player, was selected winner of the 1983 Open Mandolin Championship in Woodstock Ontario, winner of the 1986 Open Mandolin Championship in Winfield, Kansas, and winner of the 1989 Old Time Fiddle Championship in Sackville, New Brunswick. He scored among the top ten in Nashville's Grand Masters Fiddle Championship in 1990 and in Napean, Ontario's 1990 and 1991 Grand Masters Fiddle Championships. Ray has accomplished many accolades, the most notable playing a concert filling the shoes of an ailing Bill Monroe, the father of Bluegrass Music in 1982. His love for Bluegrass has found him playing alongside his heroes, David Grisman, Sam Bush, Tony Rice, Jerry Douglas, Tony Trischka, Doc Watson, Bela Fleck, ... and is well respected amongst them.

Ray's talents continue to be recognized and sought out. He has been seen side-manning the likes of Roch Voisine, the Band, the Rankin's, Rita McNeil, the Barra MacNeil's, Chris Cummings and has toured with Tony Rice, with Michelle Shocked throughout Australia, Canada, and the USA, with Alison Brown in California and western Canada. As an ongoing performer of many styles, and playing great stages like the Grand Ol' Opry and Carnegie Hall, Ray currently performs on his own as well as with John McDermott, Eamonn Dillon, Cape Bretons Brakin' Tradition , Rita MacNeil, Mike O'Reilly/ Dick Smith Band, The Canadian Grass Unit (with Pickin' Partner Frank Doody) and "Bowfire" (A new and exciting theatre show featuring 10 virtuoso violinists). Knowing Ray's credits and television experience, CBC asked him to be musical director for a Country music television series called "Fiddlehead Country" and is now the house fiddler for the french music show "Pour L'Amour De Country". Because of his busy schedule, not allowing time to give lessons to the many who ask, Ray has been trancribing his solo's to be printed in tablature and music notation. When time permits, a video of the solo's broken down will also be available so one can learn the musical ideas Ray's picked up over the past 25 years.

Ray has recorded on hundreds of sessions and presently has five solo projects of his own. "I am proud and thankful to be making music my profession and I hope that in striving to be the best I can be, you will enjoy my music for years to come. Thank you."