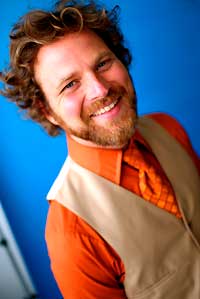 Brian MacMillan is one of Canada’s finest young musicians. An extremely talented singer-songwriter, multi-instrumentalist, and producer, Brian’s uplifting music is a blend of all of his favourite styles; Folk, Reggae, World and Pop music. Equally at ease and captivating as a solo performer or with his trio, Brian aims to connect and convey his genuine love of making and sharing music.

Brian has released 2 critically acclaimed solo albums; Gone To See The Morning in 2001 and Let The Darkness Go in 2007. He has since been across Canada 6 times, gathering a solid fan-base along the way. He continues to be heavily supported by the CBC and many national college radio stations across Canada. He has just released his 3rd album, “Shine”.

The Ontario Council of Folk Festivals recognized Brian’s songwriting abilities in 2005 by awarding him the Colleen Peterson Award for a song he wrote with juno nominee Lori Cullen. Brian is a 2x Ontario Arts Council grant recipient.

Brian has performed at many of Ontario’s finest folk festivals including, Mariposa, Eaglewood, Shelter Valley, Blue Skies, and Home County. His song, “Signs”,was chosen by Do Right records in Toronto to appear on the 2008, “Required Listening” compilation.

Brian plays Stonebridge Guitars and has a gluten-free cookie named after him, “The Mackie”, by New Moon Kitchen! www.brianmacmillanmusic.com