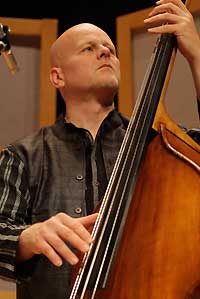 A prolific composer and producer, yet recognized primarily as a bass player, George also plays a variety of instruments; many featured on his award-winning (HMV “fresh blood” grand prize) solo CD,"Music for Plants, Animals, and Humans". He has performance and/or producer credits on on over 500 cds . George has toured for 11 years with Holly Cole. He has also toured and recorded with Ken Whiteley, Sharlene Wallace, Julie Michels, Joe Sealy, Carol Welsman, Valdy, and many others. He has also produced artists such as (Amanda Martinez, Eliana Cuevas, Laila Biali, Rita Chiarelli, Julie Michels, Patricia O’Callaghan and The Toronto Tabla Ensemble).

George was presented with the 2007 national jazz award for “bassist of the year” and is currently performing with his own quintet. www.myspace.com/georgekoller